Lacrosse is a fast, tactical and technical sport descending from Native Americans, also known as "The fastest team sport on two feet"​. The sport is a combination of more familiar sports, like rugby, (ice) hockey and American football. There are ten players per team in men's and women's lacrosse, and six players in box lacrosse.

All players have a stick with a net at the end which is used to pass the ball around. This ball is made of hard rubber and has the size of a hockey ball. The aim of the game is to throw the ball into the goal of the opponent with your stick. The game starts in the middle of the field with a battle to decide who gets the ball. When a team is in possession of the ball, it is passed around or a player with ball starts running toward goal. Defending players are able to make contact with the players to prevent the opponent from scoring. The game is played on grass or artificial turf field which has the same size as a soccer field. The rules of men's lacrosse and women's lacrosse are quite different, the men's game is more physical and the women's game more tactical. 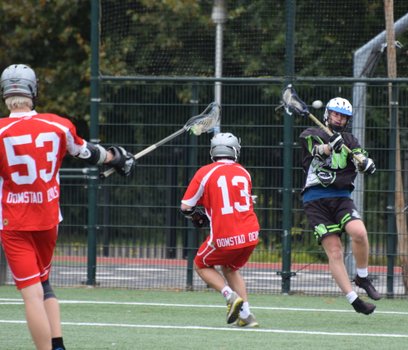